How to Spot and Identify a Hornet’s Nest 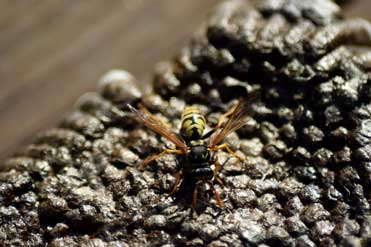 Hornets are one of the largest and most aggressive members of the wasp family, and their stings are one of the most painful and sometimes the most deadly (depending on the type of hornet). The best way to avoid being stung by a hornet is to know whether you are in the presence of one, or by identifying their nest, especially one that could be in the vicinity of your home.

Where Can You Spot Them?

You want to look for the nest outside, high up in covered areas. Hornet nests are typically located within or atop of trees, in attic rafters and other covered areas. They can also be found near the eaves of houses or under decks. Another place to keep an eye out for them could be on a utility pole.

Oftentimes the nests are hard to spot until the autumn when all the leaves fall off of the trees and reveal the nest hiding within it. However, usually by this time, the Hornets will be dead or dying, with the queen planning to hibernate through the winter months.

Hornets’ nest look like gray-oval shaped objects that are composed of a paper-like substance that is made from hornet saliva and wood pulp. The Queen Hornet will construct the hornet nest to house their eggs. The queen will lay one egg within a cell and then constructs a comb, building her way out.

The size of a hornet nest will grow in accordance to the size of the colony. Some nests can even grow as large as basketballs. Other common shapes are, as the colony grows, a football, a stalactite or an inverted teardrop. However, these nests are only used once and will be abandoned once the worker bees die in the winter time.

If you spot a nest during the active season, be aware that hornets are very protective of their home and their eggs, so you don’t want to be caught near their nest.

You can double check if the nest is indeed a hornet nest by checking the wasps and making sure it is a hornet that is flying to the nest. Here are some distinguishing features that will help identify a hornet…from a distance.

If you think you have spotted a hornet’s nest near your home, do not try and attempt to rid of it yourself. Hornet nests can be extremely dangerous to handle, so it’s best to contact a pest control company to help remove the nest safely.