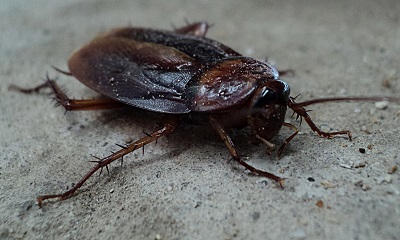 The lowly cockroach; it’s disgusted and fascinated mankind for centuries. Their ability to survive even the most extreme condition leads us to come up with ever more creative ways to rid them of our environment, while studies increase on their adeptness at survival.
The cockroach belongs to the same order of insect that includes termites, and as a group they’ve managed to populate the earth for about 320 million years. There are about 4600 identifiable cockroach species, of which only about 4 have made themselves a plague to human beings. You’ll find this adaptable insect from cold climates as far north as the Arctic, right down to tropical climates where they tend to be bigger than their colder cousins. Most species grow to be about the size of an adult’s thumbnail at full maturity.
Cockroaches have a tough exoskeleton which acts as outer armor to protect their soft insides, and is coated with a waxy layer to protect the insect from water. There are two sets of wings – the first which are used in flight, are protected by a thicker and stronger pair which is used to deflect damage to the flight wings.
In the wild, cockroaches can live in a variety of different homes. Some prefer leaf litter, tree stumps, under log piles or other piles of debris. There are cockroaches that live in water, either come up for air periodically, or carrying a bubble of air with them to breathe as they dive for food. Some have adapted to survive in deserts without the need for water and others prefer to set up home in the nests of birds or small animals.
Among the hardiest of insects, cockroaches can survive without food for a month, or continue to flourish on very little food. There are documented cases of a cockroach feeding only on the glue of a postage stamp and living to tell the tale. Some species can go without air for up to 45 minutes and suffer no apparent ill effects. Some species of nymphs can hibernate, explaining their ability to survive even a brutal winter. Whatever else you want to call them, a cockroach has an incredible ability to adapt to its environment and limitations.
The lethal dose of radiation that a cockroach can withstand is anywhere from 6 to 15 times that of a human being. This is why it’s said that this little insect will inherit the earth if humans manage to destroy themselves in a nuclear war. (Although in actual fact, cockroaches share this radiation resilience with other insects such as the fruit fly). Our cells are most vulnerable to radiation when they divide. Since a cockroach’s cells divide at a far lower rate than ours (its’ said that their cells divide only – at best- once a week when they are juveniles and with each molt) they are able to withstand bursts of radiation. Lingering radiation would still affect them at cell division, but since not all cockroaches molt at the same time, their continued survival would be highly likely.